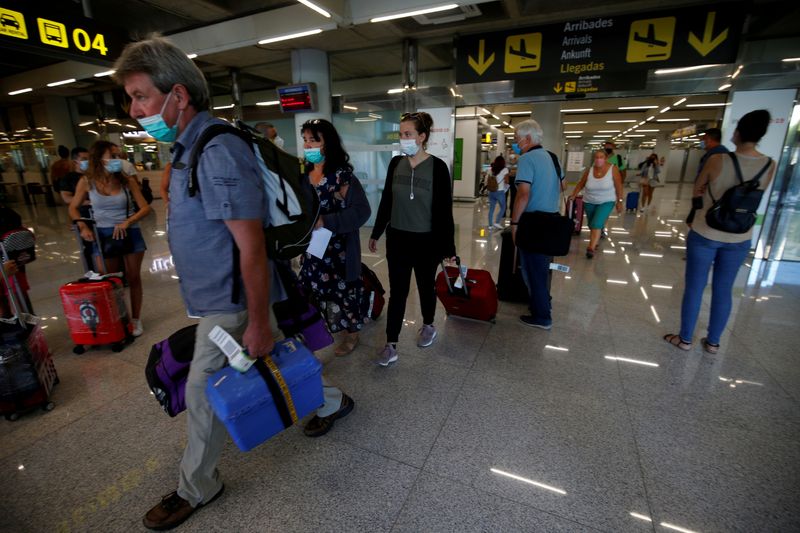 BRUSSELS (Reuters) – Leaders of Europe’s coronavirus-stricken travel and tourism industries have appealed to the EU’s chief executive to press governments to end quarantine requirements and instead embrace coordinated restrictions and testing.

The appeal came as data from airports’ group ACI Europe, one of the signatories to the Sept. 17 letter, pointed to a “double-dip” air traffic slump, with passenger numbers down 73% in the first two weeks of September, after a 65% decline in August.

The EU executive this month proposed a common “traffic light” system designed to coordinate travel restrictions among EU states and replace the patchwork of rules and quarantine regimes blamed for the renewed collapse in travel.

But with COVID-19 cases rising, governments are reluctant to drop more drastic restrictions and quarantines – condemned by the industry as disproportionate to the risks of travel within a region where community transmission is already widespread.

Ireland, where travel curbs have been challenged in court by Ryanair (I:), moved on Thursday to quarantine arrivals from Italy and Greece on the basis of stricter infection-rate criteria than those proposed by the EU.

“Failure to fully implement the Commission’s proposal would kill any chances of a potential recovery,” the travel industry bodies wrote to von der Leyen.

The letter was signed by an alphabet soup of trade bodies together representing more than 5,000 companies and millions of workers in sectors ranging from aviation and travel agents to hotels, restaurants and campsites, and their supply chains.

“We are thus urging you make this issue a top priority” in discussions with national leaders, it added, highlighting the 10% of EU economic output generated by tourism and its 12% share of the workforce. “What is actually at stake is the recovery of Europe and European economies.”

In a non-binding vote on Thursday, EU lawmakers urged member states to adopt common methodologies in their fight against the pandemic, ahead of a Sept. 22 meeting of European affairs ministers that will address better coordinated border controls.

Tesla’s $25,000 Electric Car Means Game Over For Gas And Oil

Here’s What To Know About People Of Praise, The Christian Group Amy Coney Barrett Belongs To